Who was the guy? : Well, it was a closeout game, so the answer is the same as in seemingly every other Lightning closeout game over the last three playoffs. Andrei Vasilevskiy had another shutout — his sixth in the Lightning’s last seven playoffs — this one, a 49-save gem of a performance in a game that saw the Panthers own the shot meter all night. He was the best goalkeeper in the world, at his best.

What was the key? : Even knowing that the final shot count favored the Panthers by nearly a 2:1 ratio, the first period was on another level as Florida edged the Lightning 18-3. But Tampa Bay, even stifled, was not shaken. Even when they had not one, but two (!) goals called up by coaching challenges within minutes, the Lightning kept their cool. Maybe it’s because they knew they had Vasilevskiy in goal, or maybe it’s because they’ve been through enough playoff battles to know that sometimes you have to weather storms. They survived that early push and eventually scored a villain who couldn’t be recalled.

Key stat: Hats off to our Joe Smith for this one.

The moment it was over: Officially, Ondrej Palat’s empty goal 23 seconds from the end sealed this one. Unofficially, once the Lightning got on the board in the third period, they really felt like they were in the next round – although Aaron Ekblad came awfully close to tying the game with about five minutes left, only to strike iron.

The moment of the game: It must be the sequence of two overturned Lightning goals. The first saw the Panthers dispute that a puck went out of the net to stay in play, which should be an open and closed case. Player replays of both teams’ body language indicated that might be the case. The only problem was that there was apparently no angle showing that the puck had actually left the net. The referees canceled the goal so they must have seen something we couldn’t see on TV, but it took them forever to come to that conclusion.

This reversal was one thing. For the Lightning to score again a few minutes later, only to be knocked down again due to a hand pass on a face-off, was another. This one was an obviously okay knockdown, but to see two taken off the board in such a short time is so rare that one had to wonder what impact it would have on the Lightning. And when they finally broke through, their first reaction was to watch the replay just to be safe.

Is it a goal? pic.twitter.com/8ZA9DEK4eg

This time it was for real, and that was all they needed.

Who was the guy? : The focus on Game 4 was squarely on Nazem Kadri after his series-ending collision with Jordan Binnington in Game 3 and the fallout from that, which included racist attacks and death threats.

Granted, Kadri should never have faced those, no matter how inflamed the emotions of Game 3 were. The bad blood on the ice was clear regardless, in part because his past playoffs hadn’t given him much of the benefit of the doubt – just look back to the playoffs last year, when he was suspended for illegal control over Justin Faulk. But in Game 4, he fed on it and responded with a three-goal game. That’s the ideal answer from Colorado’s perspective. He’s an incredibly hard-hitting player who can rock a streak while playing his game and frustrating opponents as long as he does not cross the line.

“For the haters, this was for them.”

Nazem Kadri spoke to the panel about his performance tonight in St. Louis and dealing with the threats he received after Game 3 pic.twitter.com/w88yIGm7Yf

What was the key? Colorado was by far the best five-on-five team. St. Louis generated less than 30% of the shot share. Sometimes the Blues can do without the majority of shots as long as they control the quality of the fight. But that wasn’t the case in Game 4. Colorado created 71.6% of the Natural Stat Trick expected goal share as they managed to take quality shots from the home plate area, while their opponent only counted a few.

Key stat: The Blues faced Ryan O’Reilly against Nathan MacKinnon when they had the home advantage. In 13:49 of five-on-five ice time overall, the Avalanche outshot St. Louis 19-12 and generated 10 scoring chances against the Blues’ four. It was a key game throughout this series, and the away team had the advantage.

When it was over: It was bad enough when Colorado scored twice in 1:23, with counts from Erik Johnson and Kadri to tie the score and then take the lead. But as that second goal was announced, Devon Toews took advantage of a Brayden Schenn turnover to make it 3-1 for the Avalanche. The road team scored three goals on consecutive shots in 1:42 of playing time. From then on, the Blues had to work hard to come back to level the score. But Colorado widened the gap once their opponent closed in and held their lead.

Game time: Kadri let the crowd get the go-ahead goal in the second half, and the Blues didn’t seem to like it.

David Perron and Pavel Buchnevich entered the game with the Colorado center moments later, which led to a 5-3 power play for the Avalanche.

Either of these could have been checked off as “the moment”. There was a lot of material here because there is so much drama in this whole situation (and I thought there were no soap operas in hockey).

Nazem Kadri on the goal after David Perron’s tackle: “Lose your temper and we’ll make you pay.

After that power play expired, Kadri scored his second goal of the game. Fresh out of the penalty area, Perron went to nudge his opponent when he celebrated the goal. Although he never made contact, it looked like a pretty deliberate attempt at revenge.

Avalanche Anxiety Meter: 🤠 … Not only does Colorado go home with a chance to close it out, but they should feel good about how their players held their own in the chaos and supported their teammate. 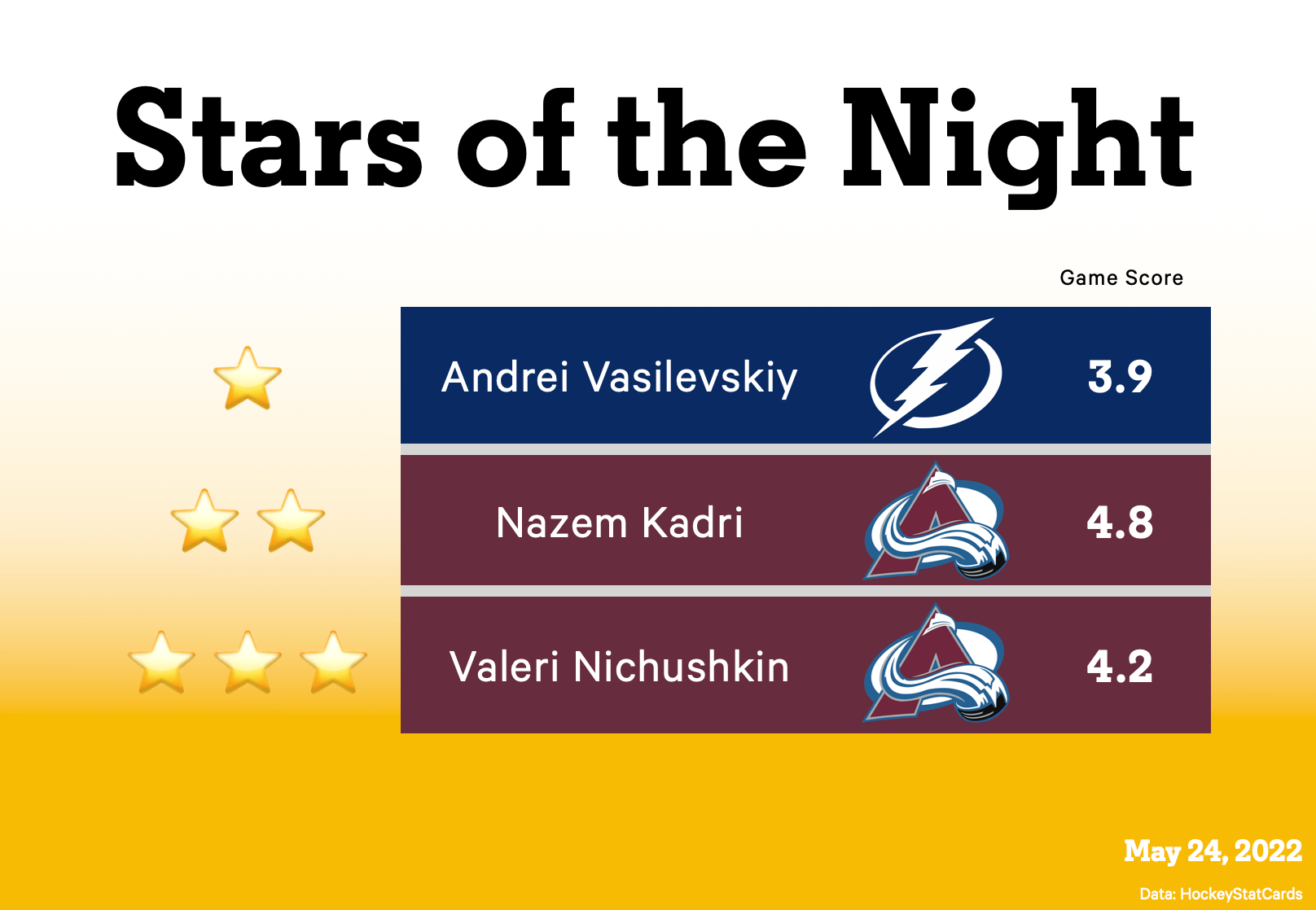 On the appointment for Tuesday