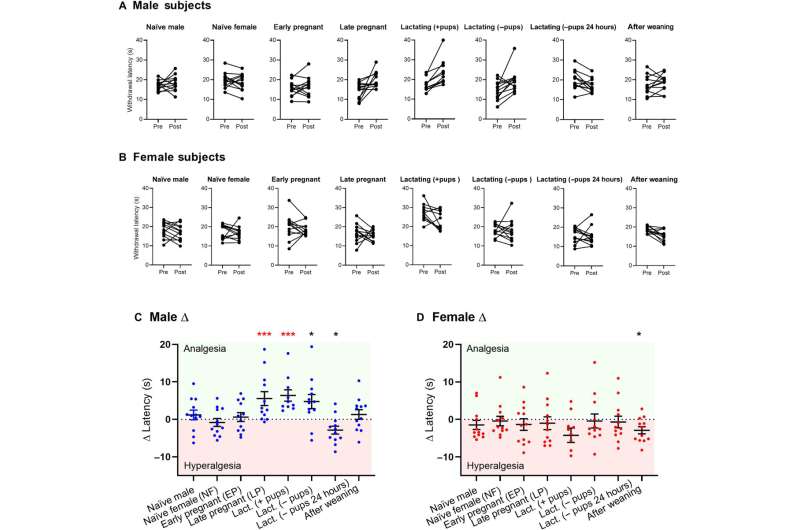 Olfactory exposure to mice in late gestation and lactation produced analgesia in male but not female mice in the radiant heat paw withdrawal test. (A and B) Latency to hind paw withdrawal (s) from radiant heat of male (A) and female (B) mice before (Pre) and during (Post) exposure to stimulated mice of various conditions of reproduction: naïve male, naïve female (NF), early pregnancy (EP), late pregnancy (LP), lactation (Lact.) [with pups present (+ pups), without pups present (− pups), and with pups removed 24 hours before (− pups 24 hours)], and after weaning. (C and D) Change (Δ) in hind paw withdrawal latency (Post-Pre) under all stimulation conditions shown in graphs (A) and (B) in male (C) and female mice ( D). Positive values ​​(green) represent analgesia; negative values ​​(pink) represent hyperalgesia. In all graphs, individual data are presented (n = 10-12 mice per sex per condition); black bars represent means ± SEM. *P Scientific Advances (2022). DOI: 10.1126/sciadv.abi9366

Researchers at McGill University have identified a form of chemical signaling in mice to defend their offspring. The researchers found that proximity to pregnant and lactating female mice increased stress hormones in males and even decreased their sensitivity to pain.

“The findings have important implications for improving the reliability and reproducibility of experiments involving mice. This is yet another example of a previously unknown factor in the laboratory environment that can affect results. scientific studies,” says Jeffrey Mogil, professor in the Department of Psychology at McGill University and holder of the EP Taylor Chair in Pain Studies.

According to co-author Sarah Rosen, “What is likely happening is that the female mice are signaling to the males who might be considering attacking their babies that they will defend them vigorously. This is the threat of a possible fight to come that causes the stress.”

“Mice have a richer communication with each other than we think, it’s just that a lot of it is through smell,” says Mogil. Researchers began to search for the olfactory chemical responsible. Several odorants have been identified, but one, n-pentyl acetate, which is released in the urine of pregnant and lactating female mice, was particularly effective in producing stress in male mice.

“Intriguingly, n-pentyl acetate is also responsible for the unique smell of bananas. After a quick trip to the supermarket for banana oil, we were able to confirm that the banana extract smell was stressful. both male mice and pregnant female mice,” says co-author Lucas Lima.

The discovery represents a breakthrough in the science of mammalian social signaling. “There are a number of examples of male-to-female olfactory signaling in rodents, but far fewer examples of female-to-male signaling, especially outside of the realm of sexual behavior,” says Mogil.