Felice Herrig’s MMA career is over.

The former UFC contender decided to hang up the gloves following her loss at UFCFight Night 207 on Saturday. strawweight contest.

Immediately after the fight, Herrig (14-10 MMA, 5-5 UFC) left his gloves in the middle of the octagon and announced his retirement from the sport.

“It was an honor to be in the UFC for eight years and to fight for 20 years,” Herrig told Paul Felder in his in-cage post-fight interview. “The most important thing for me is that I had two ACL surgeries and I really didn’t want to go out like that. I really wanted to prove to myself that I could overcome two knee operations and come back and continue to fight as much as possible. high level.

“I felt better than ever in training, my mind felt good and I had so much positive energy around me and great coaches. But I knew that if I didn’t feel it in the cage, it would be my last fight. Not in a bad way, I just feel like there’s something else for me and it’s time to close this chapter of my life. Which is really sad, because I I’ve spent the past 20 years doing it, but it’s time to move on.

Herrig says she’s done with MMA, but she’s not closing the door on all combat sports. Herrig, who went 23-5 as a professional kickboxer before starting MMA, is open to trying his hand at boxing if the opportunity arises.

But when it comes to his MMA career, Herrig has mixed feelings. Not only has she lost the love of cage fighting, but she also feels like she could have accomplished more than she did.

“I’m proud and I’m not proud,” Herrig said at the UFC Fight Night 207 post-fight press conference regarding his career. “I feel like my anxiety has been going on for so long, like my anxiety about the scale. I’ve had a lot of eating disorders that have helped me not perform as well. I had a lot of anxiety about sports and the media. I was like I couldn’t do it in my interviews because they would take it that way. I feel like I could have done more.

“And I know I’ve done a lot, but I think that’s what’s so hard. I’m leaving the sport as a physically capable human being. I’m not like a lot of people who are like, ‘Oh, it’s time to hang up the gloves because that sloppy girl, her body is screwed’. Everything went to shit. I feel good physically. I don’t know if the sport carried me. … If you don’t do anymore what you love, then there’s no point in me staying.

Herrig retires with 25 professional fights under his belt. She is best known for her long career in the UFC, but she has also competed in other major organizations such as Bellator and Invicta FC.

Throughout her career, Herrig has defeated notable opponents such as Alexa Grasso, Cortney Casey, Kailin Curran and others. She also earned a $50,000 Performance of the Night bonus and competed in a co-main event of a UFC Fight Night card.

Photos: Felice Herrig over the years 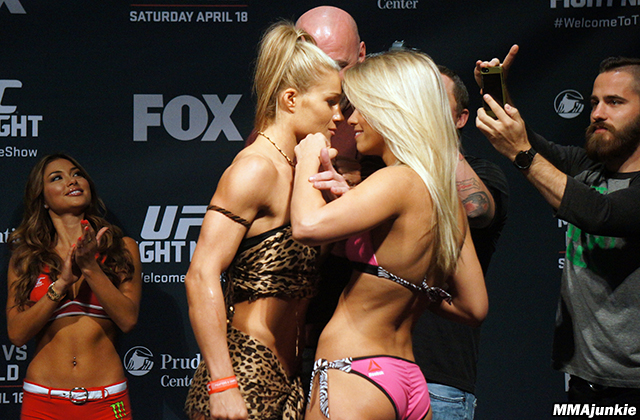