A single Neanderthal in love may be to blame for passing on a genetic quirk to up to a million people who died from Covid.

To date, around the world, around 6.3 million people have died from the coronavirus that caused the pandemic.

Many have lost their lives because they have a relatively common genetic quirk that makes the lungs more susceptible to infection.

Now the expert whose research identified the effect of the genetic difference on the lungs has said it stems from a single ‘romantic connection’ between a Neanderthal and a member of our own human species.

If this sexual act had not taken place 60,000 years ago, many lives would have been saved from the deadly virus.

Neanderthals were a species that lived alongside humans tens of thousands of years ago and were very similar in appearance and size, but were generally stockier and more muscular (Pictured: A replica of a Neanderthal head male at the Natural History Museum, London)

WHO WERE THE NEANDERTALS?

Neanderthals were a close human ancestor who mysteriously died out around 40,000 years ago.

The species lived in Africa with early humans for millennia before crossing into Europe around 300,000 years ago.

They were later joined by humans, who entered Eurasia around 48,000 years ago.

They were the original “cavemen”, historically considered stupid and brutal.

But in recent years, evidence points to a more sophisticated, multi-talented “caveman” of sorts.

It now seems likely that Neanderthals buried their dead, painted, and even interbred with humans.

Professor James Davies, associate professor of genomics in the Radcliffe Department of Medicine at the University of Oxford, told the Cheltenham Science Festival: “If you stop and think about it, it comes from a single interspecific relationship and from ‘one child.’

“And if the human-Neanderthal dinner date had gone wrong, we would have had a much better time in Covid and had hundreds of thousands less deaths.”

Asked for a rough estimate of the exact number of people likely to have died of Covid as a result of the 60,000-year-old sex act, he replied: “It’s in the hundreds of thousands to a million.”

The role of Neanderthals in the susceptibility of humans to Covid was first revealed in 2020.

But the unique “romantic connection” behind it has been revealed by careful analysis of the “letters” of our genetic code.

DNA is made up of thousands of combinations of the letters A, C, G, and T, which represent four different chemicals.

But people with the high-risk genetic oddity for Covid have the exact same 28 differences in the letters of their genetic code.

This makes it almost certain that they are all descended from the same two people, rather than the product of many Neanderthals having sex with many Homo sapiens. 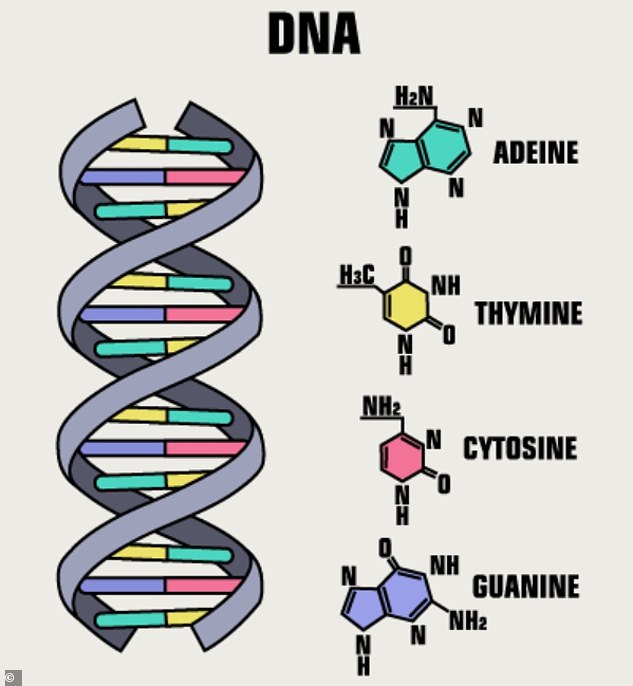 DNA is made up of four building blocks called nucleotides – adenine (A), thymine (T), guanine (G) and cytosine (C)

Genetic variation is present in humans today because our ancestors had sex with Neanderthals around 60,000 years ago.

People who have the variation, found on chromosome three, are up to three times more likely to need a ventilator if they catch the virus.

Professor Davies told the science festival: ‘We believe this is a unique romantic affair, and the reason we know this is because it is inherited from this block with 28 changes in ‘one letter, and you can follow that all the way back and it has to be one event.

Simon Underdown, professor of biological anthropology at Oxford Brookes University, who also addressed the festival audience, said: “I want you to keep in mind, when we start thinking about the time when Neanderthals and Homo sapiens collided and continued that date from dinner, how far back in time that was, and some 60,000 years later we see the impact of that encounter in the world today today in more serious forms of Covid.

He added: “The average size of a Neanderthal group is estimated to be around 20 to 25 individuals, so these are tiny little groups scattered across the continent.”

He described the chances of Neanderthals colliding, let alone Homo sapiens, as “unlikely”, making the sexual encounter that introduced the Covid-linked gene into modern humans remarkable.

Once Neanderthals and Homo sapiens met, it’s unlikely they realized they were different, so happily interbred species.

The genetic variation that some people have now, which comes from Neanderthals, is linked to a gene called LZTFL1 and is believed to act on lung cells.

These cells grow more than one important protein on their surface, which the coronavirus is able to latch onto and spread through the lungs, causing more damage that can be fatal.

The genetic oddity is more common in people of South Asian descent and could partly explain India’s high death toll during the pandemic.

Professor Davies said: ‘If you stop and think about it, it comes from one interspecies relationship and one child.

“And if the human-Neanderthal dinner date had gone wrong, we would have had a much better time in Covid and had hundreds of thousands less deaths.”

However, Neanderthal genes have also been suggested to help humans by making us smarter, helping us adapt quickly to new diets, and boosting the immune system to help fight off harmful viruses and bacteria.

GENES, GENOMES AND DNA: AN OVERVIEW

Embarrassed: a short section of DNA

Chromosome: a bundle of genes and other pieces of DNA and proteins

Genome: complete set of DNA of an organism

Your genome is the instructions for making and sustaining you. It is written in a chemical code called DNA. All living things – plants, bacteria, viruses and animals – have a genome.

Genes are the instructions for making the proteins our bodies are made of – from the keratin in hair and nails to antibody proteins that fight infection.