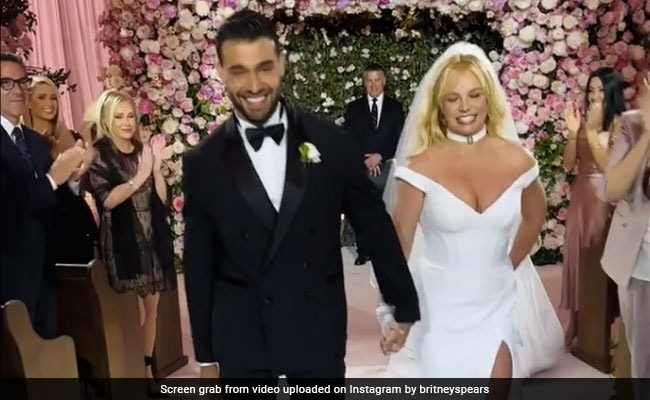 Britney Spears married her fiancé Sam Asghari in an intimate yet dreamy ceremony earlier this week. On Friday, the pop star shared moments from her wedding to Sam on her Instagram profile. She captioned a video: “Fairy tales are real.” In the clip, she could be seen walking down the aisle, kissing the groom. The video also had a look at other moments from the ceremony. For her big day, Britney Spears opted for a Versace bridal ensemble and looked better than ever. She also shared another Instagram post, which featured photos of the celebrity friends who attended, including Madonna, Drew Barrymore and Paris Hilton.

She shared another post, an excerpt of which read, “Wow! We did it. We are married ! . WE’RE GETTING MARRIED. I had a panic attack, then I pulled myself together. The team who transformed our house into a dream castle were fantastic. The ceremony was a dream and the party was even better. So many amazing people came to our wedding and I’m still in shock.”

She shared another photo from the festivities on Instagram.

Sharing dreamy footage from the ceremony, Britney Spears simply added her wedding date in the caption.

Sam Asghari and Britney Spears met in 2016 when they co-starred in a music video for her single Slumber party. After announcing their engagement late last year, Britney Spears frequently shared photos with Sam on her Instagram profile. The couple said last month that the surprise pregnancy they announced weeks earlier had ended in miscarriage.