Impact Wrestling took to their Twitter account earlier today and announced that The Influence (Tenille Dashwood and Madison Rayne) would be defending their Knockouts Tag Team Championships at “Slammiversary” this Sunday.

Recent episodes of Impact have teased the reunion of old friends and foes, Taya Valkyrie and Rosemary. The duo will attempt to put aside all past differences to challenge The Influence and attempt to dethrone them as Knockouts Tag Team Champions.

At Slammiversary, former friends and foes Rosemary and AAA Champion Reina de Reinas Taya Valkyrie will join forces to challenge The Influence for the Knockouts World Tag Team Titles! After Havok failed to prove herself to The Influence, she disappeared from IMPACT! Area. A week later, Rosemary picked up a huge singles victory over Tenille Dashwood, but soon found herself on the receiving end of a two-on-one beating. Taya Valkyrie was there to make the save as she helped Rosemary send The Influence rushing to the back. Can Rosemary and Valkyrie co-exist in order to add another championship milestone to their long list of rewards? Or will The Influence continue its avant-garde reign?

As reported last week, a huge Monster’s Ball match is also scheduled for Pay-Per-View which will be Sami Callihan’s first televised match in 9 months. He must face Moose one-on-one in the historically brutal match.

“Slammiversary 2022” is scheduled for this Sunday, June 19 at the Nashville Fairgrounds in Nashville, Tennessee.

Below is the updated lineup for “Slammiversary:

Queen of the Mountain match for the Impact Knockouts World Championship
Tasha Steelz (c) vs. Deonna Purrazzo vs. Jordynne Grace vs. Chelsea Green vs. Mia Yim 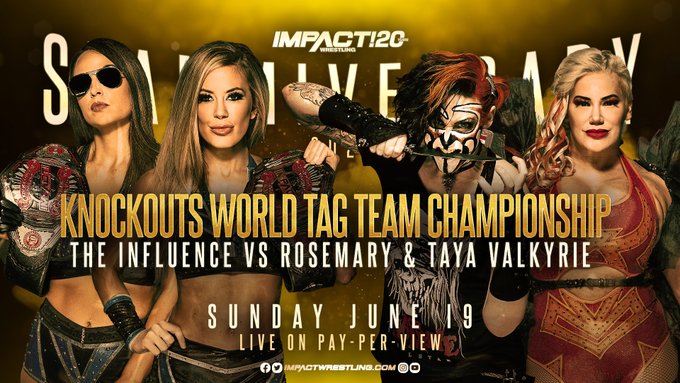