Zooey Deschanel and her boyfriend Jonathan Scott looked couldn’t be prouder as they unveiled their newly renovated home for her Drew + Jonathan Reveal magazine on Wednesday.

The stunning Los Angeles home was originally built in 1938 by famed architect Gerard Colcord, and the 42-year-old New Girl star and 44-year-old Property Brothers star – who runs the magazine with twin brother Drew – have completely updated inside and out.

“It’s a house that fits our tastes and needs, aesthetically and functionally,” Zooey said approvingly. 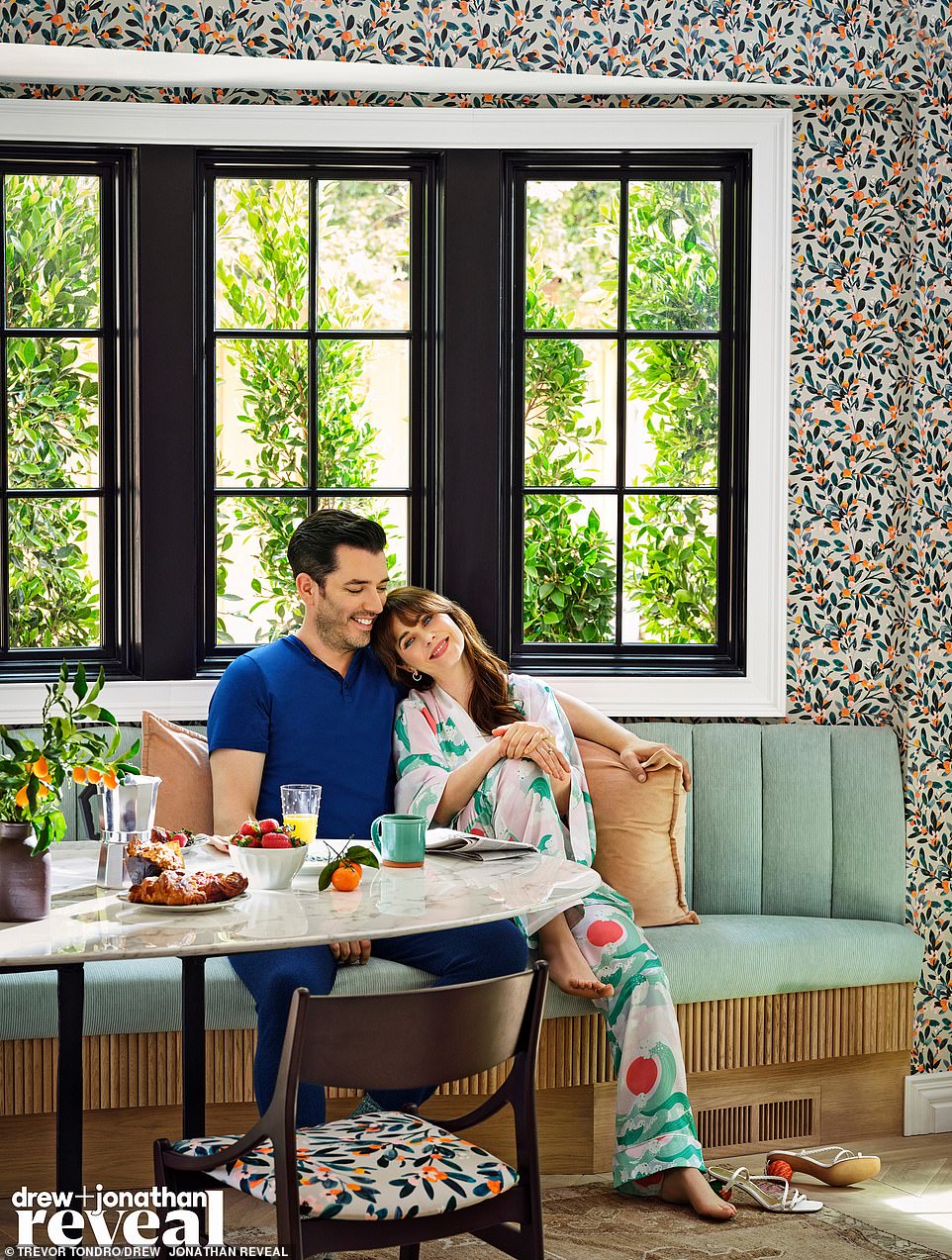 Dream home: Zooey Deschanel, 42, and her beau Jonathan Scott, 44, showed off their Los Angeles home in her Drew + Jonathan Reveal magazine on Wednesday. The couple renovated a 1938 home in Brentwood designed by famed architect Gerard Colcord

Zooey and Jonathan purchased the home during the height of the ongoing coronavirus pandemic in June 2020, and they undertook extensive restorations and changes over the next two years.

The two have been a couple since August 2019, and they had a fateful first meeting when she met him on a sibling episode of Carpool Karaoke which also featured brother Drew and older sister Emily Deschanel.

The couple took their time in announcing the purchase, as it wasn’t until January this year that Jonathan revealed the couple had found their “forever home”.

It was love at first sight for Zooey, who said: “As soon as we pulled into the driveway, we knew this house was special. 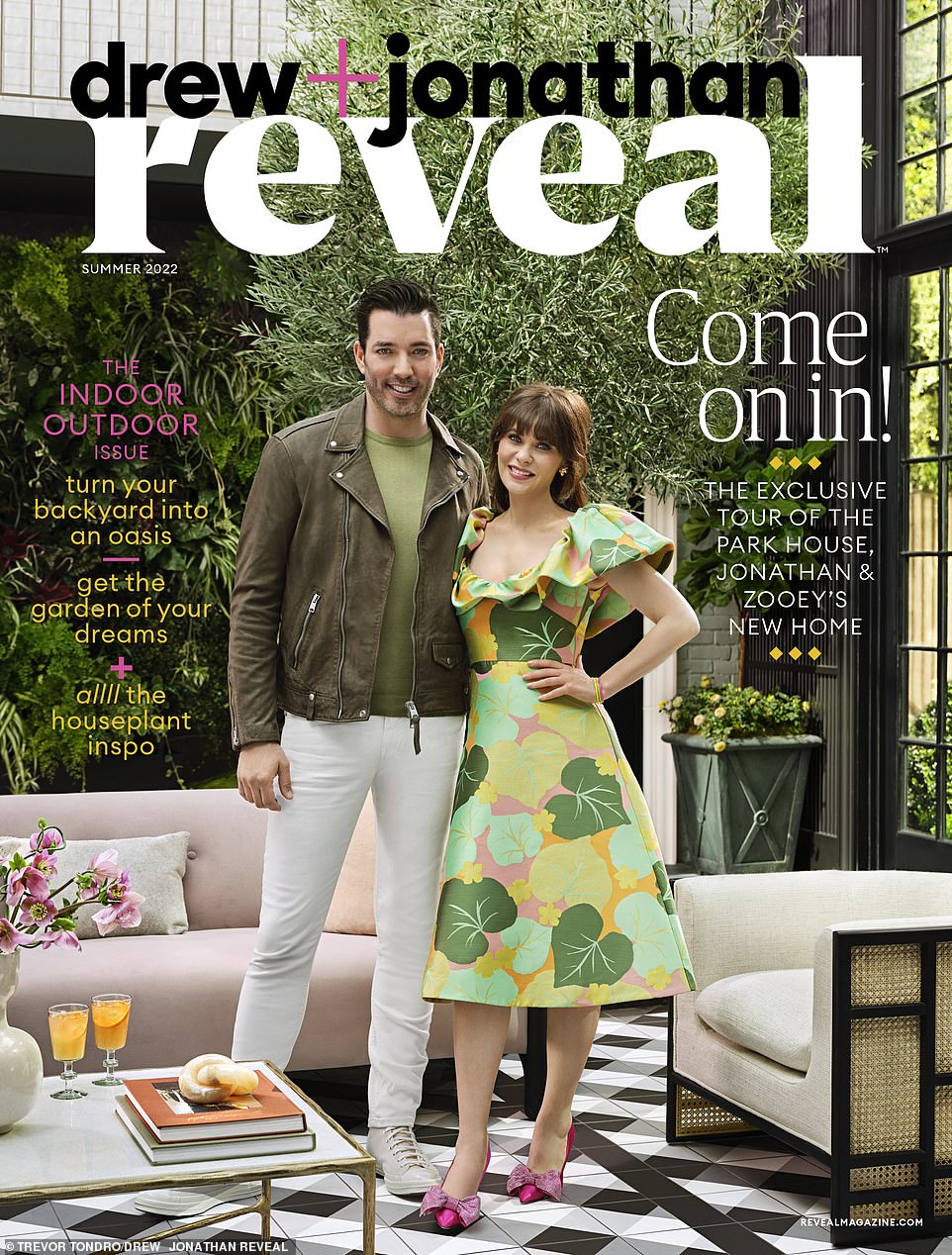 Back to basics: Jonathan and Zooey bought the house in June 2020 and spent two years renovating it inside and out. They tried to restore it to its classic style after incongruous updates in the 1970s and 1980s. 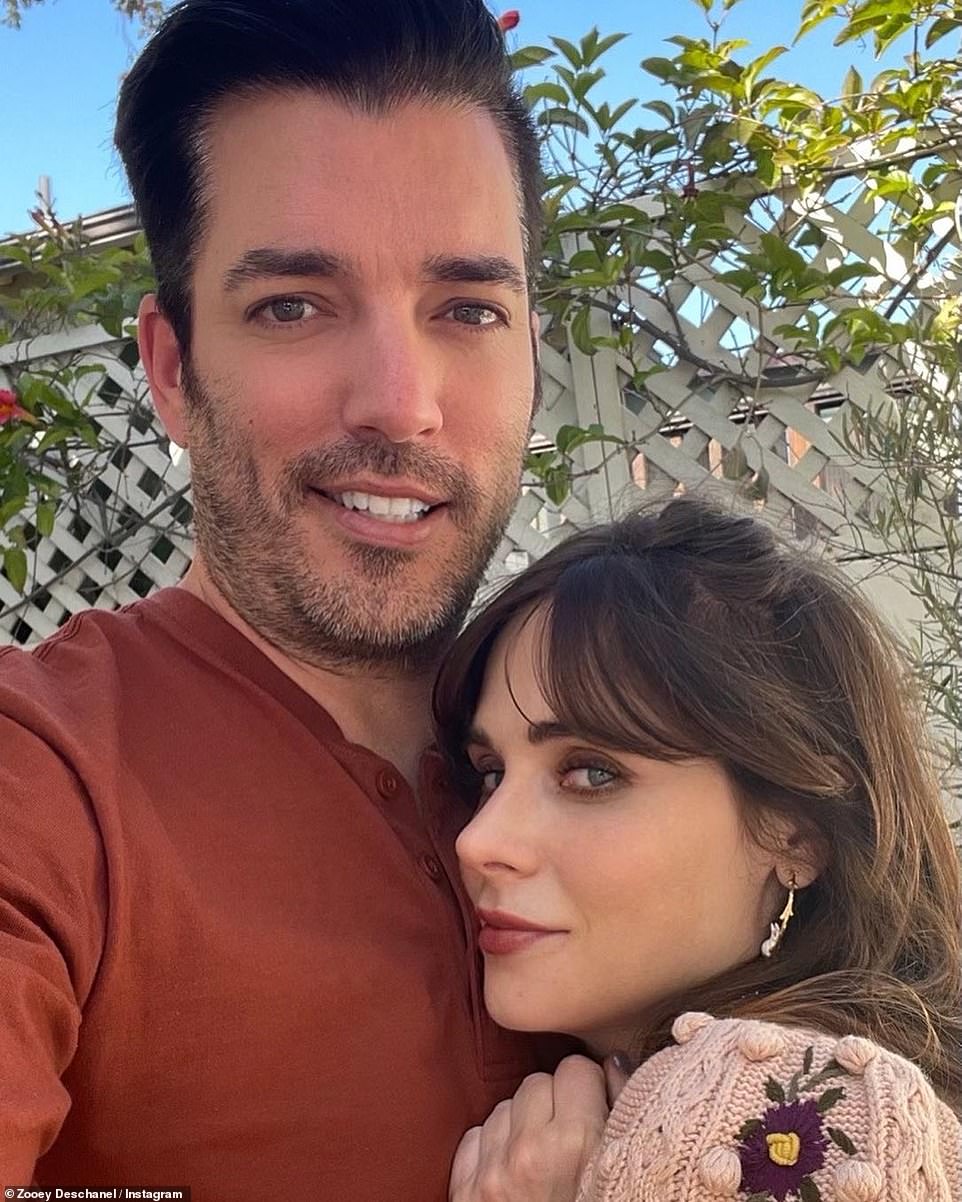 Fateful meeting: The two have been a couple since August 2019, and they had a fateful first meeting when she met him in a sibling episode of Carpool Karaoke which also featured brother Drew and older sister Emily Deschanel

The classic home has five spacious bedrooms and is located in the tony Brentwood neighborhood of Los Angeles, home to a number of Hollywood stars.

“It was a beautiful house with a lot of history,” Jonathan said approvingly.

The couple enjoyed the traditional Georgian Revival style, although renovations over the years have added incongruous modern touches that didn’t quite match.

“With two jerky additions in the ’70s and ’80s, the house no longer functioned well by today’s standards,” Jonathan said, and he and Zooey set out to “preserve” the style of Colcord, who was a traditionalist, even in 1938. standards.

But the renovations not only brought the rest of the house in line with the original design, but also updated it to make the house much more efficient.

The couple installed Tesla roof tiles to generate electricity from the abundant sun, which is then stored in a large battery system.

Nine smart panels throughout the house monitor the energy consumption of all electrical appliances, and the plumbing system is equipped with a gray water recycling system that reuses water from showers and sinks for toilets and even outdoor irrigation. 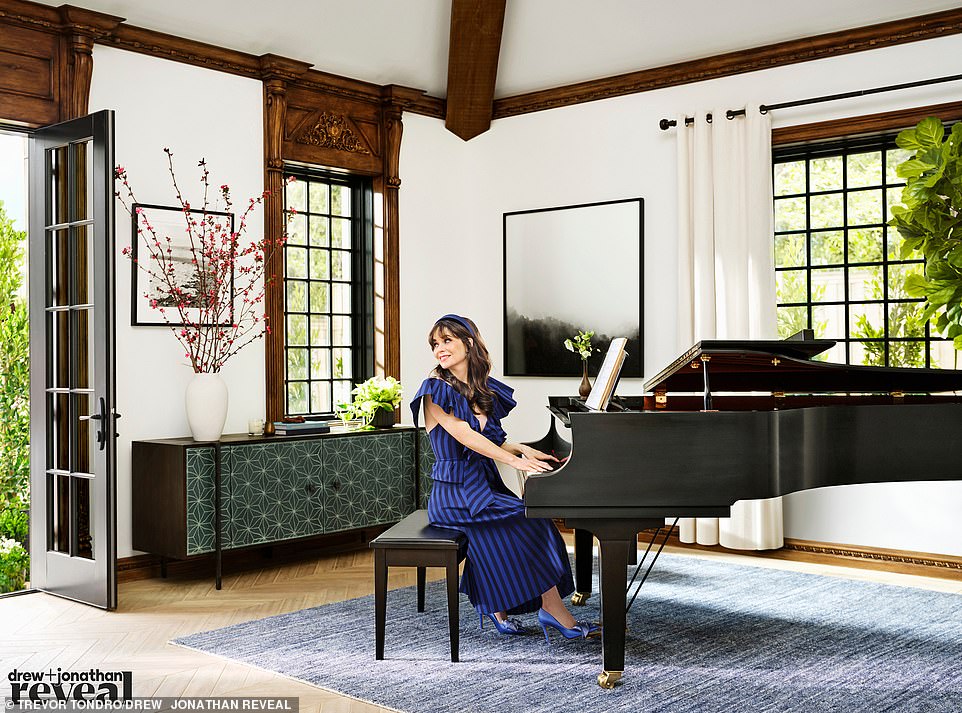 Impeccable: The five-bedroom house is Georgian Revival. Jonathan worked on the exterior, while Zooey decorated the interior with tiles and “dope-a**” upholstery with Moroccan fabrics and Portuguese tiles.

The exterior of the house had wood paneling that did not meet fire codes. So Jonathan replaced it with brick and also covered the house with a fire resistant material which would also make it more insulated.

“It still looks like a 100-year-old home, but it’s now LEED certified and will end up using less grid energy than a small apartment,” he added.

While working on the exterior, Zooey made sure the interior was decorated with “dope-a**” tiles and upholstery.

The house acquired an international feel through its use of Portuguese tiles and Moroccan fabrics, which contrasted with the tasteful white walls.

She also made sure there was plenty of ‘prep space’ in the kitchen, which was decorated with pretty green cabinets and what Jonathan jokes was ‘the biggest island ever built’, which featured a wooden counter. tasteful white granite.

The All The Real Girls actress applauded her partner for his skill in restoring the house to its former glory.

“Jonathan is so amazing at figuring this out. He’s been doing it for so long for his clients, and now he’s doing it for us and our family. 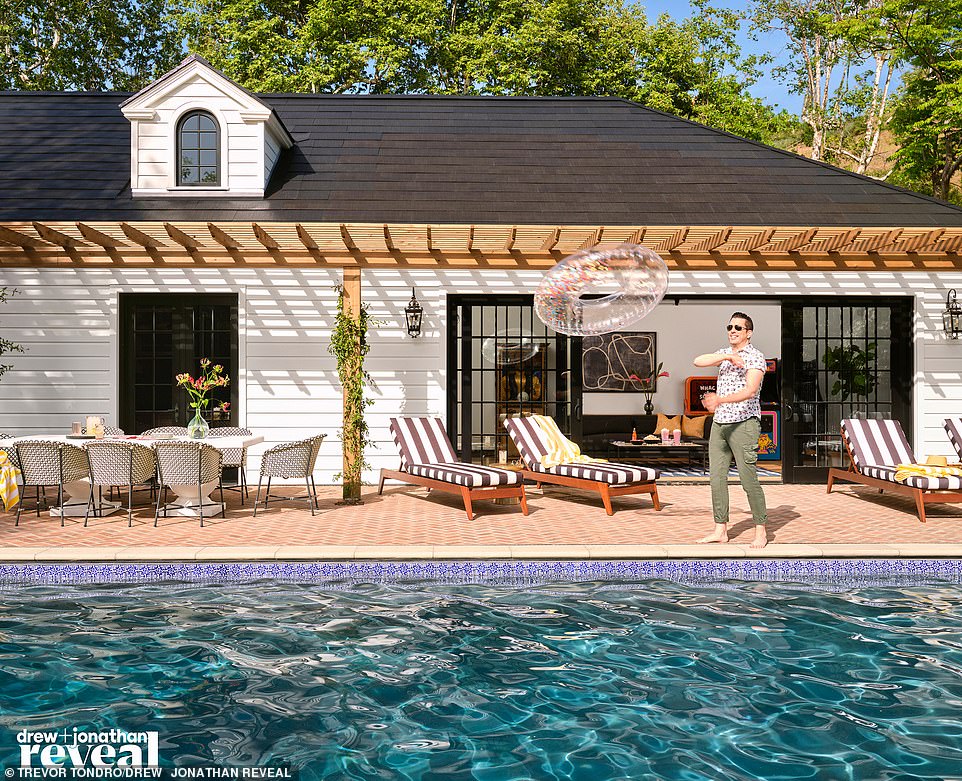 Future Home: The home, dubbed the Park House for its expansive yard, has been updated with new insulation and Tesla solar tiles, plus a battery system and gray water recycling. “It’s not just a smart home,” the HGTV star bragged “It’s a genius”

Her family seemed particularly enamored with the house’s expansive courtyard, which was decorated with a 60-year-old rose garden and magnificent sycamores.

“When we brought the kids here, they asked, ‘Do we live in a park? ‘, Jonathan recounted, so they rightly chose to name their new home the Park House.

Zooey and Jonathan seemed relieved to be done with their dream home after spending so much time getting it perfect.

“It was really convenient for both of us,” Zooey shared. “Many Saturdays we sat down looking for the right details to add to this home.” 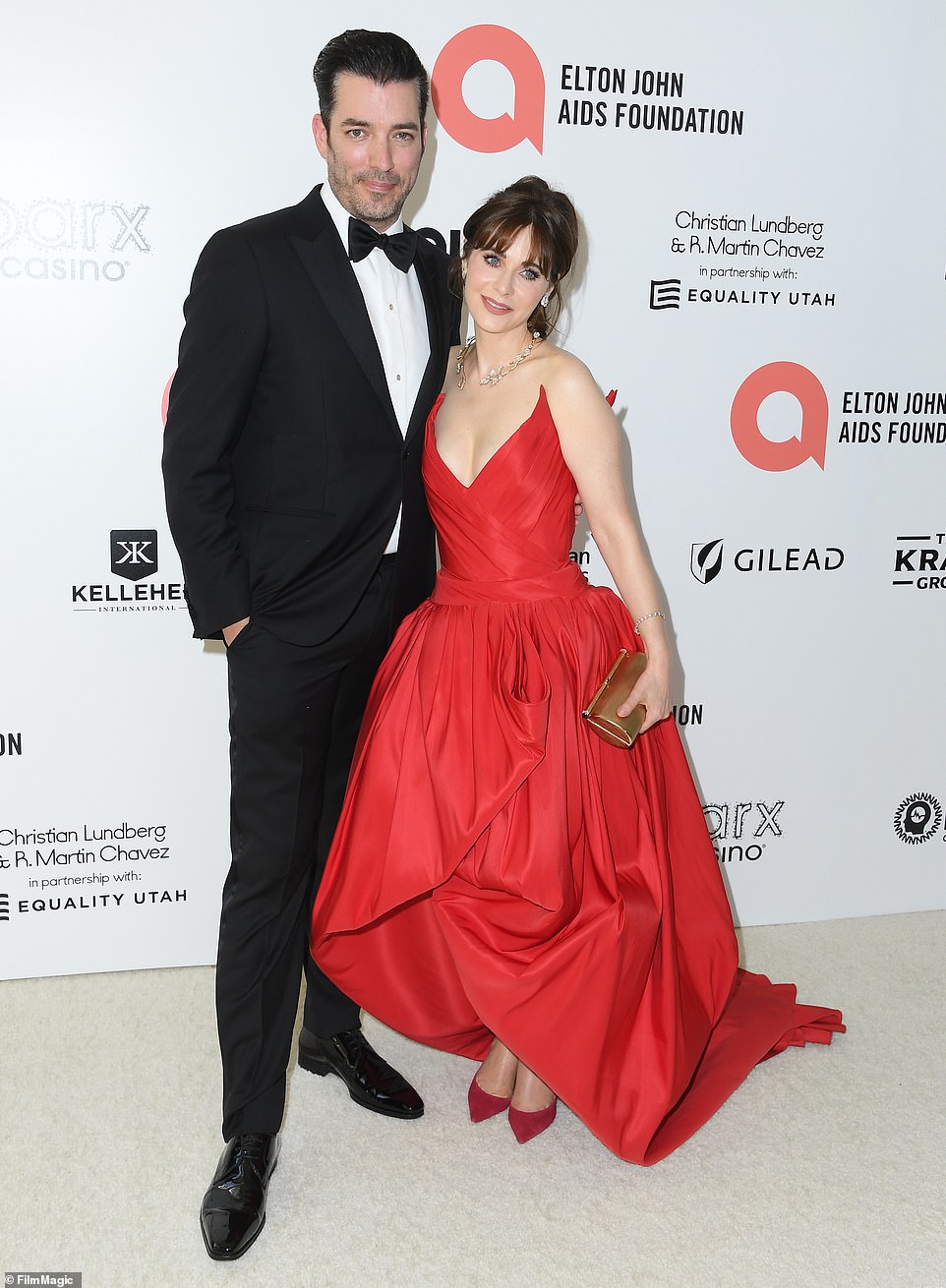 Hard Work: Zooey and Jonathan seemed relieved to be done with their dream home after spending so much time getting it perfect. “It was really convenient for both of us,” Zooey shared. “Many Saturdays we sat down looking for the right details to add to this house”; seen in March in West Hollywood