When you think of the precious crown jewels, a 400-year-old gallstone probably isn’t what comes to mind!

However, a team of scientists has found something very valuable inside calcified lumps extracted from the gallbladder of a 16th century Italian prince.

Remnants of the first E. Coli have been discovered and researchers at McMaster University in Canada have used them to reconstruct the first ancient genome of the bacterium.

This can serve as a “comparison point” to give us information on how the notorious superbug has evolved over the past 400 years. 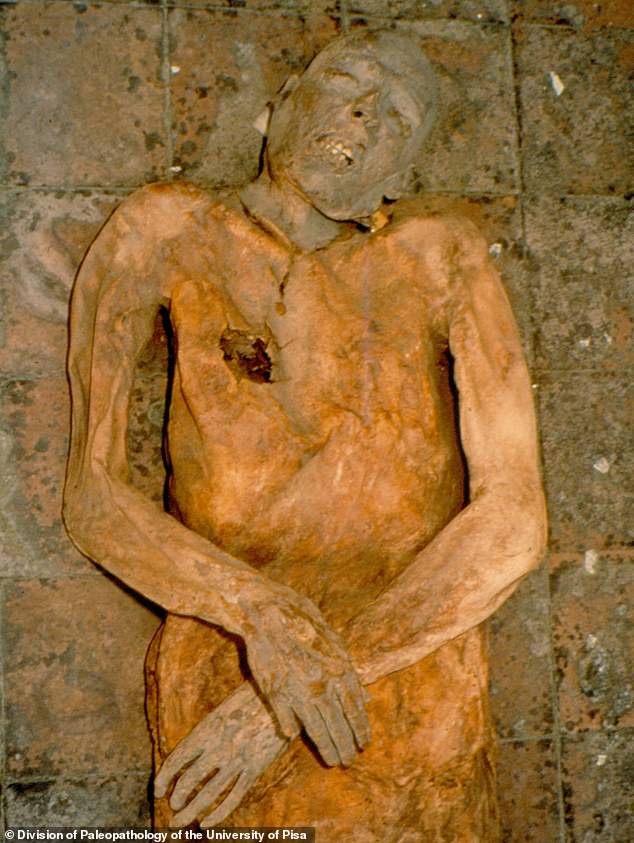 Remnants of the first E. Coli bacteria were present in the gallstones of a mummified Italian prince 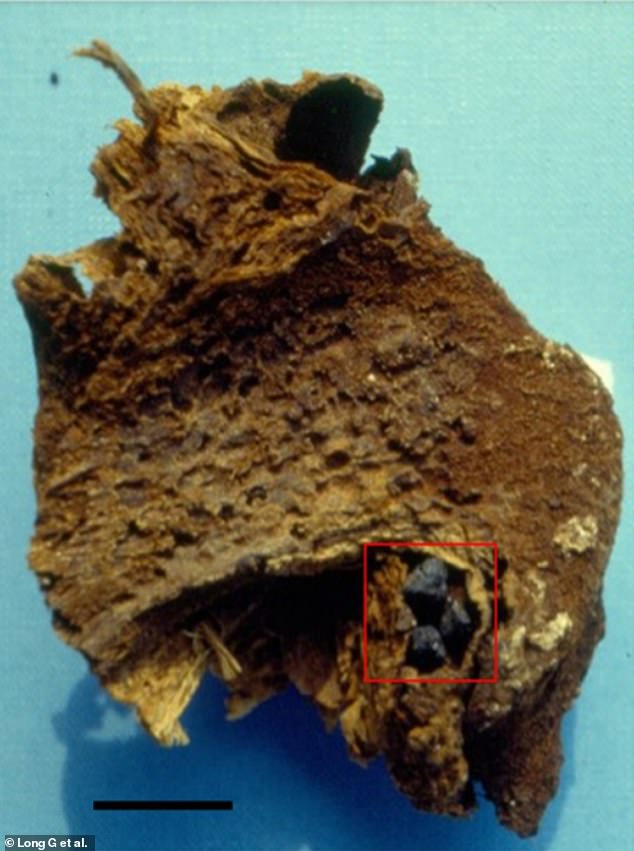 The liver and gallbladder of Giovani d’Avalos. Gallstones can be seen in the red rectangle, which contain fragments of E. Coli. The scale bar represents 1 cm 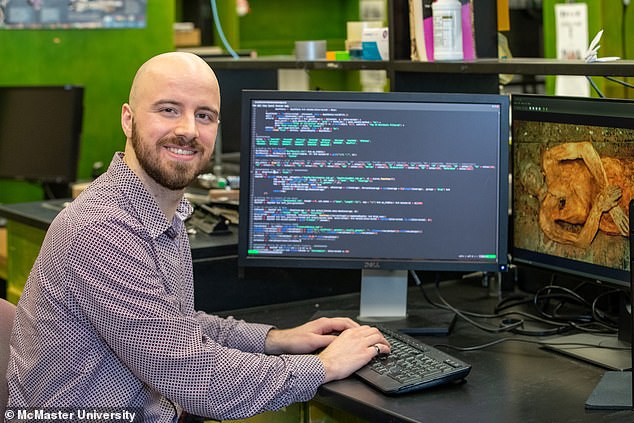 George Long (pictured) is co-lead author of the study and said: ‘We were able to identify what was an opportunistic pathogen, dig down to the functions of the genome and provide guidelines to help researchers who might be exploring d ‘other hidden pathogens’

The mummified remains of Giovani d’Avalos were recovered from the Abbey of Saint Domenico Maggiore in Naples in 1983, along with those of other Italian nobles of the Renaissance period.

The Neapolitan nobleman, who died in 1586 at the age of 48, is said to have suffered from chronic inflammation of the gallbladder due to gallstones.

The study’s lead author, George Long, said: ‘When we examined these remains, there was no evidence that this man had E. coli.

“Unlike an infection like smallpox, there are no physiological indicators. Nobody knew what it was.

E. coli, or Escherichia colican infect organs that help produce and transport bile, including the gallbladder.

It is able to release an enzyme that can convert bilirubin, a chemical produced during the normal breakdown of hemoglobin, into calcium salts – the first step in the formation of pigment stones.

In addition to contributing to the formation of gallstones, E. Coli can cause food poisoning, diarrhea, urinary tract infections and pneumonia.

It is known as a “commensal”, a bacterium that resides within us and can act as an opportunistic pathogen infecting its host during times of stress, underlying disease or immunodeficiency.

E. Coli is also known for its resistance to antibiotics, earning it the title of “superbug”. 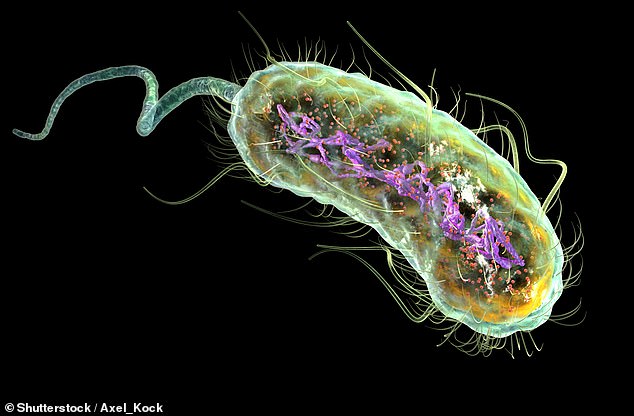 E. Coli (pictured) is also known to be resistant to antibiotics, giving it its ‘superbug’ title

WHAT IS E. COLI AND WHY IS IT DANGEROUS?

E. coli (Escherichia coli) is a bacterium that typically lives in the intestines of healthy people and animals.

This is a condition in which there is abnormal destruction of blood platelets and red blood cells.

According to the Mayo Clinic, damaged blood cells can clog the kidney’s filtering system, leading to life-threatening kidney failure.

No treatment currently exists to treat these infections. They usually go away within a week, but healthcare professionals recommend resting and drinking fluids to help prevent dehydration and fatigue.

The researchers had to meticulously isolate fragments of the target bacteria, which had been degraded by environmental contamination from multiple sources.

They used the recovered material to reconstruct the first ancient genome of E. Coli.

However, the research team explained that its full evolutionary history remains a mystery, including when it acquired antibiotic resistance.

Professor Hendrik Poinar, head of research, said: “A strict focus on the pathogens driving the pandemic as the sole narrative of mass mortality in our past misses the heavy burden that stems from the opportunistic commensals driven by the stress of lived lives.”

Evolutionary geneticist Professor Poinar, from McMaster University in Canada, who led the research, said: ‘E. coli is commonly found in the intestines of healthy people and animals.

“While most forms are harmless, some strains are responsible for outbreaks of food poisoning and serious, sometimes fatal, blood infections.” The robust and adaptable bacterium is recognized as particularly resistant to treatment.

He explained that having the genome of a 400-year-old ancestor of modern bacteria provides researchers with a “comparison point” to study how it evolved and adapted since then.

He explained that the technological feat is particularly remarkable because E. coli is both “complex and ubiquitous” – living not only in soil but also in our own microbiomes.

Professor Erick Denamur, from the University of Paris Diderot, said: “It was so moving to be able to type in this ancient E. coli and discover that, although unique, it belonged to a phylogenetic lineage characteristic of human commensals which still causes gallstones today.’

Long added, “We were able to identify what was an opportunistic pathogen, dig down to genome functions, and provide guidelines to help researchers who might be exploring other hidden pathogens.”

WHAT IS A GENOME?

An organism’s genome is written in a chemical code called DNA.

DNA, or deoxyribonucleic acid, is a complex chemical in almost all organisms that carries genetic information.

It is located in the chromosomes of the cell nucleus and almost all cells in a person’s body have the same DNA.

The human genome is made up of more than three billion pairs of these basic molecules and grouped into some 25,000 genes.

It contains the codes and instructions that tell the body how to grow and develop, but flaws in the instructions can lead to disease.

Currently, less than 0.2% of the species on Earth have been sequenced.

A group of 24 international scientists want to collect and store the genetic codes of the 1.5 million known plants, animals and fungi over the next decade.

The resulting library of life could be used by scientists to learn more about the evolution of species and how to improve our environment.

The £3.4 billion ($4.7 billion) project is described as the “most ambitious project in the history of modern biology”.