Laughs that show Prince William will have a VERY happy Father’s Day before he turns 40 this week: Kensington Palace releases charming photos of the Duke and Duchess of Cambridge with their three children taken on a family vacation in Jordan

By Kate Mansey Deputy Editor for The Mail On Sunday

He’ll be 40 in a few days, but this charming photo – released to coincide with Father’s Day – shows Prince William already has all the gifts he could possibly want.

Taken during a family holiday in Jordan, it shows William sitting between Prince George, eight, and Princess Charlotte, now seven, with her youngest, Prince Louis, now four, perched on his shoulders. He beams with contentment as his children burst into laughter.

William will celebrate his milestone birthday on Tuesday as he and wife Kate prepare to announce a move to Windsor – as The Mail first reported on Sunday last August.

This image differs from recent official photographs in that it was not taken by the Duchess of Cambridge, a keen amateur photographer. Instead, Kensington Palace said the charming portrait was captured by an anonymous private photographer while on a getaway last fall. 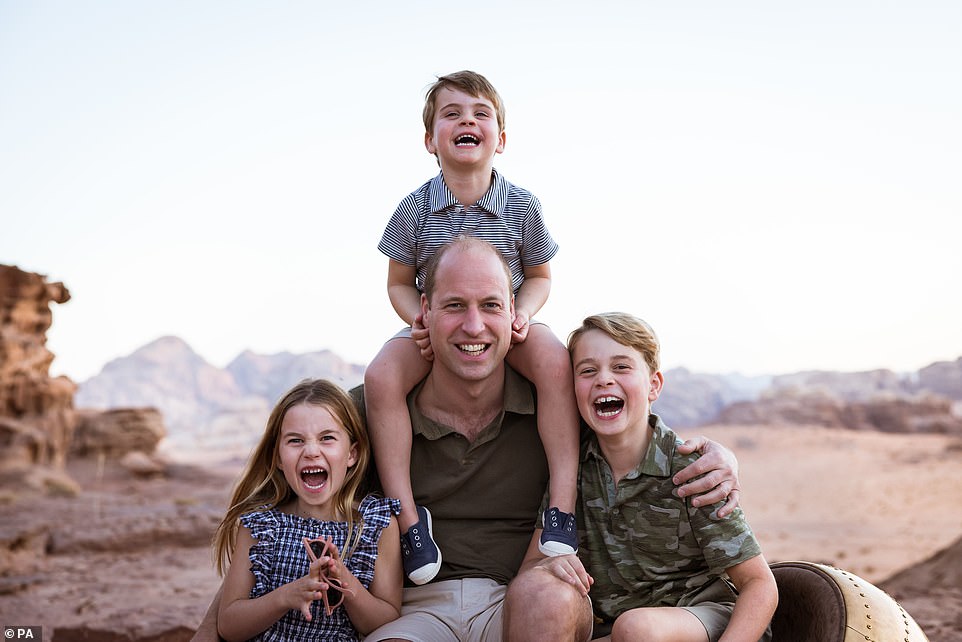 William (centre) is pictured beaming with George (right), Charlotte (left) and Prince Louis (on his shoulders) in Jordan

A similar image of the Cambridges, apparently taken on the same day and showing Kate in a khaki green dress and William in an olive shirt and beige shorts, was used for the family’s latest Christmas card.

This portrait, however, offers a more informal and relaxed view of family life. Although the exact location has not been revealed, the picturesque sandstone backdrop suggests it may have been taken in Petra, the ancient archaeological site in the desert of southwestern Jordan.

The Cambridges have a personal connection to Jordan, as Kate lived there for three years when her father Michael was posted to the capital Amman for work at British Airways in May 1984 when she was two and her sister , Pippa, was eight months old. Old. 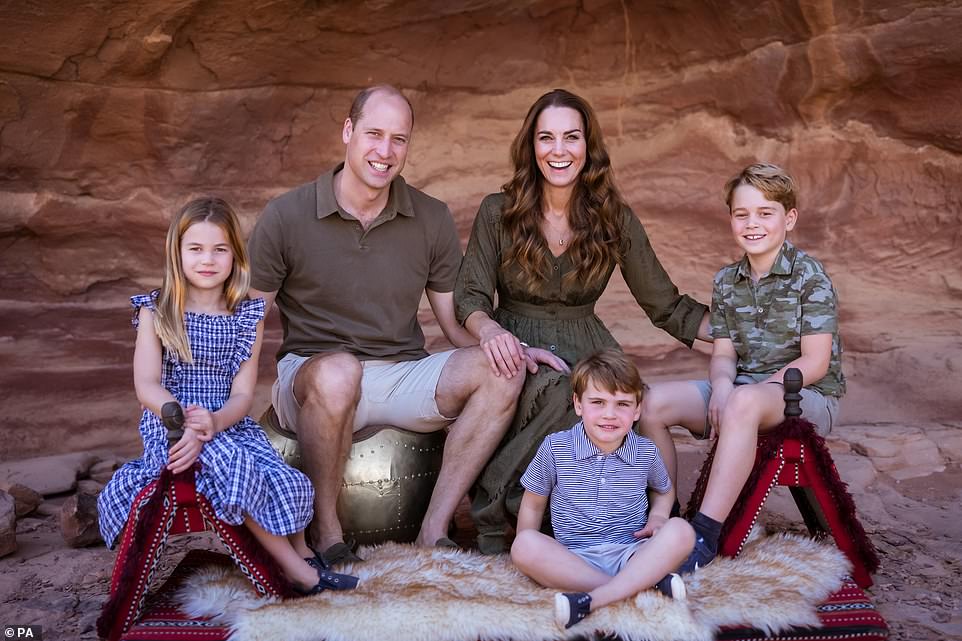 Speaking during an official visit to the country in 2018, William described Jordan as a ‘beacon of hope’, adding: ‘My wife is very sorry that she cannot be here with me for such a short time. after the birth of our son Louis, but her family remembers very fondly the almost three years she spent here as a child.

Before his birthday, friends spoke about the importance of his family.

One told the Daily Mail: ‘He loves being a dad and having a family settled around him. Having kids always puts things in perspective… Whatever happens “at work” he needs to go home and be a “normal” person for the sake of his kids, which has made him feel more at peace with the reality of his other life. .’

George, Charlotte and Louis each played central roles in the Queen’s Platinum Jubilee celebrations earlier this month, with Louis stealing the show with his spirited reactions on the balcony of Buckingham Palace to an RAF flypast and in the stands of the Party at the Palace concert. .