By Fiona Jackson for Mailonline

A NASA satellite captured stunning images of a partial solar eclipse from its unique vantage point in space – the only place it was visible.

The Solar Dynamics Observatory (SDO) photographed the moon passing in front of the sun yesterday from around 05:20 BST (01:20 ET).

The transit lasted about 35 minutes and at its peak the moon covered 67% of the fiery surface.

The spacecraft then sent back a series of images from the event showing “lunar mountains backlit by solar fire”, according to SpaceWeather.com experts.

Bumps and irregularities can be seen on the surface of the moon which it passed through and which have been identified as part of the Leibnitz and Doerfel mountain ranges. 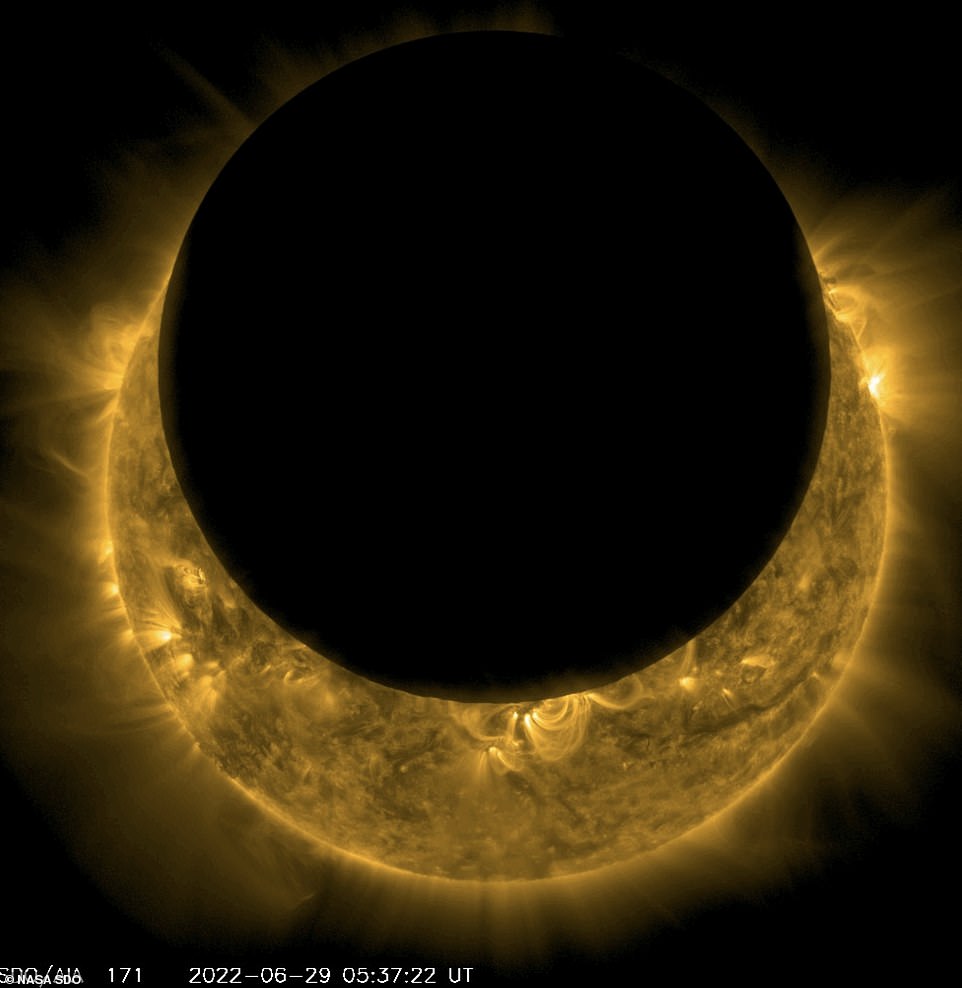 The Solar Dynamics Observatory photographed the moon passing in front of the sun yesterday from 05:20 BST (01:20 ET) 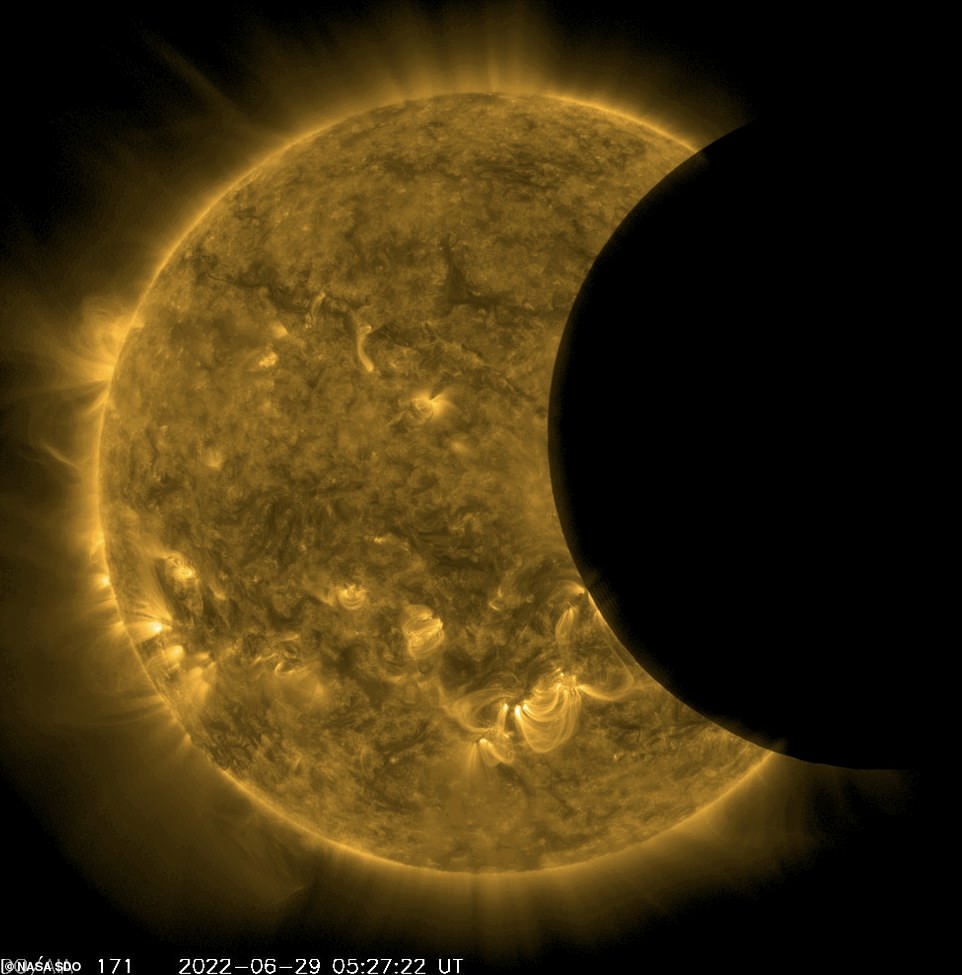 The spacecraft sent back a series of images from the event showing “lunar mountains backlit by solar fire”, according to SpaceWeather.com experts.

WHAT IS A SOLAR ECLIPSE?

Solar eclipses occur when the moon passes between Earth and the sun, casting a shadow on Earth.

There are different types, depending on how much sun appears to be obscured for a viewer at a given location.

Solar eclipses only occur about every six months – a consequence of the moon not orbiting in quite the same plane around the Earth as the planet does in its path around the sun.

Patricio Leon, from Santiago, Chile, compared close-up images of the moon moving across the sun to a topographic map from the Lunar Reconnaissance Orbiter

He was able to identify the Leibnitz and Doerfel mountain ranges near the south pole of the moon during the eclipse.

SpaceWeather.com experts said: “At the height of the eclipse, the Moon covered 67% of the Sun and the lunar mountains were backlit by solar fire.

“High-resolution images like these can help the SDO science team better understand the telescope.

“They reveal how light diffracts around SDO’s optics and filter support grids.

“Once these are calibrated, it is possible to correct the SDO data for instrumental effects and refine the images of the sun even more than before.”

Launched in 2010, NASA’s Solar Dynamics Observatory monitors the sun with a fleet of spacecraft, taking photos every 0.75 seconds.

He also studies the sun’s magnetic field, atmosphere, sunspots and other aspects that influence activity during the 11-year solar cycle.

The sun has been experiencing increased activity for the past few months as it appears to be entering a particularly active period in its 11-year activity cycle, which began in 2019 and is expected to peak in 2025.

The sun’s magnetic poles reverse at the height of the solar activity cycle, and a solar wind composed of charged particles carries the magnetic field away from the sun’s surface and through it through the solar system.

This accompanies an increase in solar flares and coronal mass ejections (CMEs) from the surface of the sun.

A CME is a large release of plasma and its accompanying magnetic field from the solar corona – the outermost part of the solar atmosphere – into the solar wind.

CMEs only impact Earth when pointed in the direction of our planet, and tend to be much slower than solar flares because they move more material. 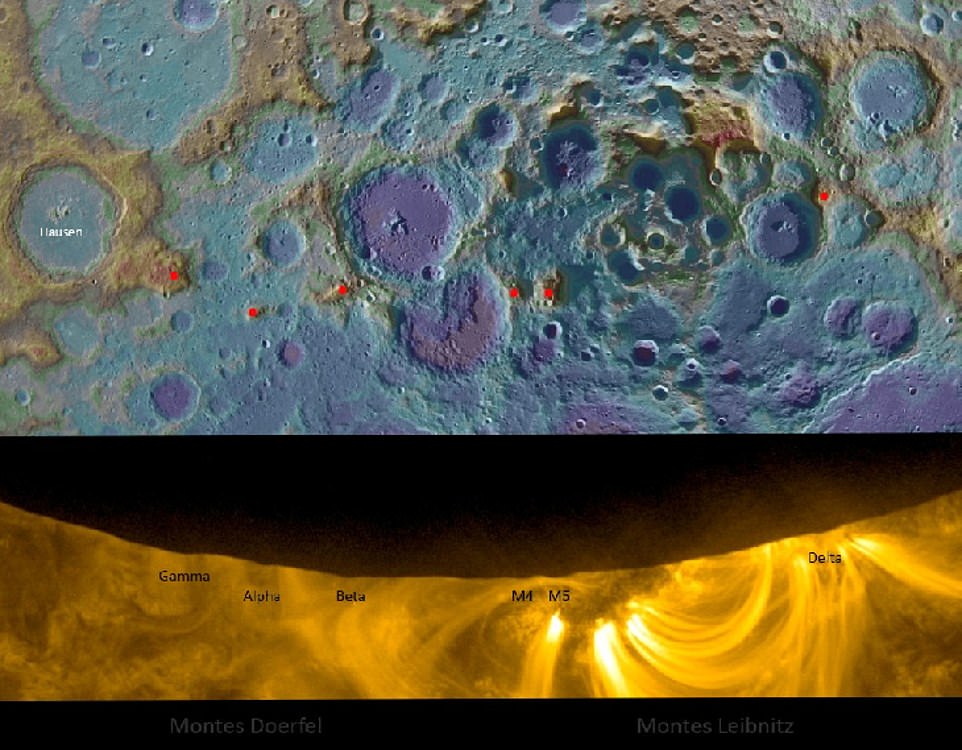 Patricio Leon, from Santiago, Chile, compared close-up images of the moon moving across the sun to a topographic map from the lunar reconnaissance orbiter. He was able to identify the Leibnitz and Doerfel mountain ranges near the south pole of the moon during the eclipse. 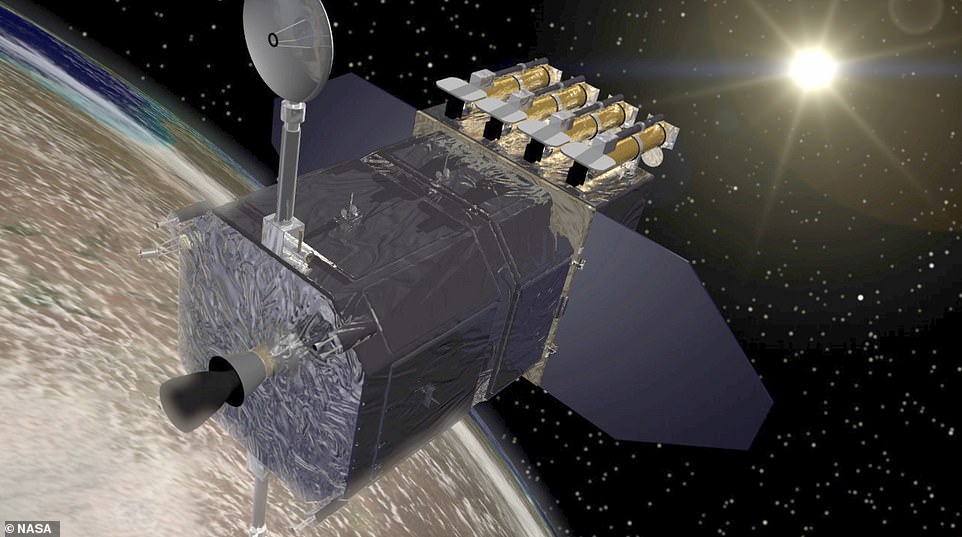 The Solar Dynamics Observatory (SDO), pictured here, studies how solar activity is created and how space weather results from that activity

The energy from an eruption can disrupt the area of ​​the atmosphere that radio waves pass through, which can cause temporary outages in navigation and communication signals.

On the other hand, CMEs have the power to jostle the Earth’s magnetic fields, creating currents that drive particles towards the Earth’s poles.

Additionally, magnetic shifts can affect a variety of human technologies, causing GPS coordinates to drift by a few meters and overloading power grids when power companies are unprepared.

There has been no extreme CME or solar flare in the modern world – the last was the Carrington event in 1859 – creating a geomagnetic storm with aurora appearing around the world, as well as fires at stations telegraphs.

The Solar Dynamics Observatory (SDO) is a NASA mission that has been observing the sun since 2010.

Its ultra-HD cameras convert different wavelengths of light into an image humans can see, and the light is then colored into a rainbow of colors.

The satellite was launched on February 11, 2010 from Cape Canaveral.

The SDO contains a suite of instruments that provide observations that will lead to a more complete understanding of the solar dynamics that drive variability in the Earth’s environment.

One of many incredible images provided by SDO

Among the tasks that this set of instruments can accomplish is to measure ultraviolet light, variations in the magnetic field of the sun, take images of the chromosphere and the inner corona, and capture the solar variations that can exist at different periods of time. a solar cycle.

To do this, it uses three separate pieces of equipment: the helioseismic and magnetic imager; Atmospheric imagery assembly; and extreme ultraviolet variability experiment.

The scientific teams receive this data, which they process, analyze, archive and then disseminate to the public.