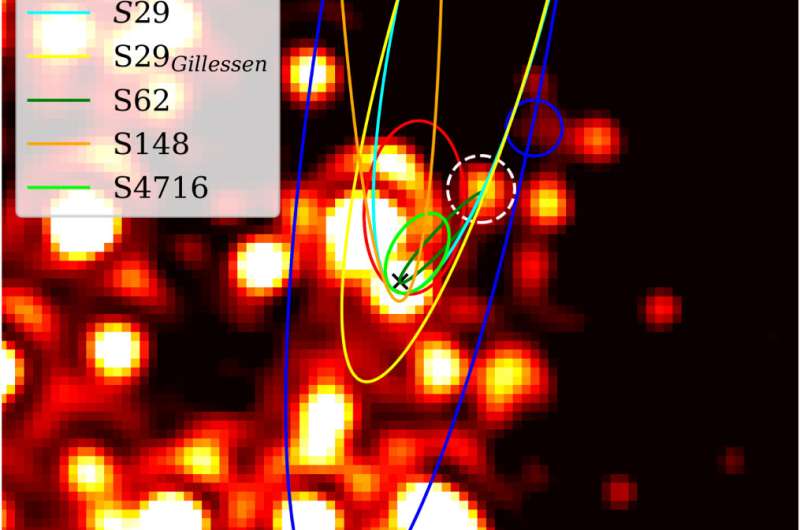 Researchers from the University of Cologne and Masaryk University in Brno (Czech Republic) have discovered the fastest known star, which travels through a black hole in record time. The star, S4716, orbits Sagittarius A*, the black hole at the center of our Milky Way, in four years and reaches a speed of around 8,000 kilometers per second. S4716 is approaching 100 AU (astronomical unit) from the black hole, a small distance by astronomical standards. One AU is 149,597,870 kilometres. The study was published in The Astrophysical Journal.

Near the black hole at the center of our galaxy is a dense star cluster. This cluster, called the S cluster, is home to more than a hundred stars that differ in luminosity and mass. S-stars move particularly fast. “A prominent member, S2, behaves like a tall person sitting in front of you in a movie theatre: it blocks your view of what’s important,” said Dr Florian Peissker, lead author of the new study. “The view towards the center of our galaxy is therefore often obscured by S2. However, in brief moments we can observe the surroundings of the central black hole.”

Thanks to constantly refined analysis methods and observations spanning almost twenty years, the scientist has now identified without a doubt a star that travels through the central supermassive black hole in just four years. A total of five telescopes have observed the star, with four of these five being combined into one large telescope to allow even more precise and detailed observations. “For a star to be in such a close and fast stable orbit near a supermassive black hole was completely unexpected and marks the limit that can be observed with traditional telescopes,” Peissker said.

Additionally, the discovery sheds new light on the origin and evolution of the orbit of fast-moving stars at the heart of the Milky Way. “The compact, short-period orbit of S4716 is quite puzzling,” said Michael Zajaček, an astrophysicist at Masaryk University in Brno who participated in the study. “Stars cannot form so easily near the black hole. S4716 had to move inwards, for example by approaching other stars and objects in the S cluster, which significantly reduced its orbit .”

The fastest star ever observed

Quote: 8,000 kilometers per second: discovery of the star with the shortest orbital period around a black hole (July 5, 2022) retrieved on July 5, 2022 from https://phys.org/news/2022-07- kilometers-star-shortest-orbital-period .html