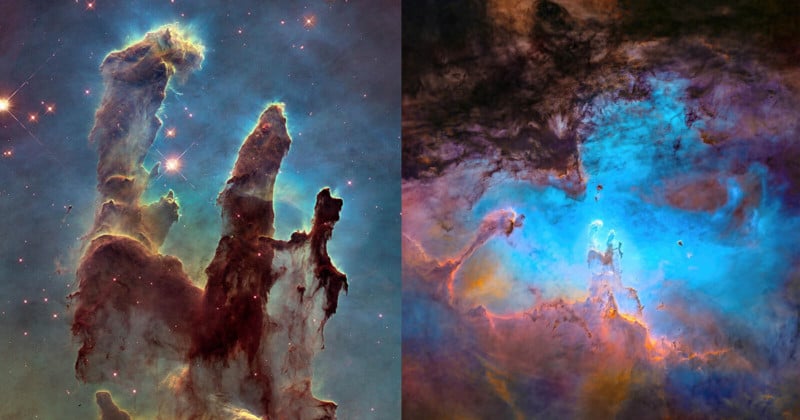 The original iconic image, taken by the Hubble Telescope, shows an active star-forming region with towering tendrils of cosmic dust and gas at the heart of the Eagle Nebula, cataloged as M16.

It was first photographed in 1995 by NASA and has had a huge cultural impact, with the image featured on everything from “t-shirts to coffee mugs”, reports National geographic.

A $16 billion space telescope vs. a $500 backyard telescope

McCarthy spoke to PetaPixel on how he recreated the Pillars of Creation from his garden in Arizona with a 12-inch Newtonian telescope and a monochrome camera using narrowband filters to create a vividly colored image.

“I photograph the Pillars of Creation a few times a year. It’s a surprisingly accessible target, near the Sagittarius star cloud in the heart of the Milky Way,” says McCarthy.

“I used special software to remove all stars from the image, so this clear view really shows the vast structures of gas and dust in the Eagle Nebula.

“The image was taken for several hours over several nights, while my telescope was guided along the stars using a sophisticated tracking mount that compensated for the Earth’s rotation.”

McCarthy posted the image on Reddit where it received nearly 10,000 upvotes. He thinks there isn’t such a big gap between very expensive government-funded telescopes and amateur astronomers shooting from their backyards.

However, McCarthy says the biggest hurdle for fans is the atmosphere.

“The atmosphere completely blocks a lot of photons and distorts the rest. Hubble, James Webb, Spitzer, etc. all have the advantage of being able to collect photons from targets completely free from the atmosphere.

“But with the expansion of commercial spaceflight opportunities, space telescopes operated by amateurs may soon become a thing,” he adds.

McCarthy agrees that a giant budget will always get you much more detailed images for the garden hobbyist, but thinks there aren’t as many limitations as people might think.

“With smaller telescopes, you can usually spend more time shooting at a target to see deeper into space. I can see objects billions of light-years away with my telescopes. As I don’t only use to take pictures, I don’t really need to go further.