Now I know what a footballer feels when he scores at Wembley, and what it’s like to appear on Glastonbury’s Pyramid Stage. Much to my disbelief, in an auction room just over a week ago, I realized my life’s ambition of over half a century.

I couldn’t help but hit the tune with joy and dance around the room to the astonishment of the onlookers.

Because I bought a dinosaur. The fossilized skeleton of a Psittacosaurus, a 120 million year old parrot lizard, no less.

It was simply one of the greatest moments of my life, an unbeatable feeling. A few days later, I’m still on cloud nine.

My joy was amplified by the fact that my winning bid was way below what I was willing to pay. The catalog estimate was £4,000-6,000, and I knew if it went over that I was sabotaged.

My wife knew how desperately I wanted to own this extraordinary relic, but she wasn’t going to let me remortgage the house. And I was pretty sure a flurry of offers from billionaire fossil collectors would push the price above £10,000 within seconds.

In fact, I was certain that a perfect specimen of Psittacosaurus was worth at least double that. 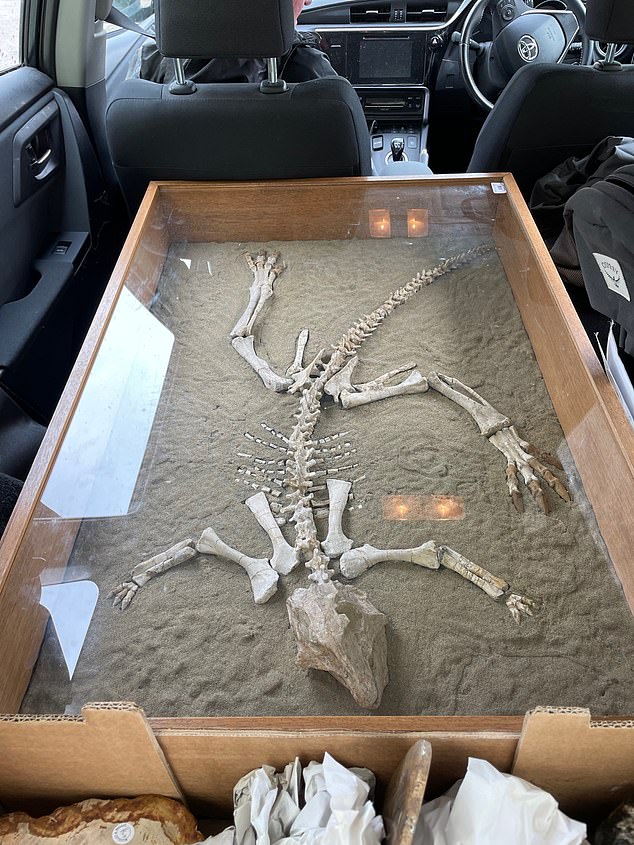 Author and historian Tom Holland celebrates as if he had won Wimbledon after fulfilling a childhood dream of owning a dinosaur, pictured the fossil

Instead, the auctioneer started bidding at £3,500 – and I was the only bidder. Can you blame me for raising my fist like a Grand Slam tennis star, then jumping up to dance in delight?

The auctioneer later said that I was the happiest customer he had ever seen. And yes, I probably was.

The whole scene was captured on CCTV at the auction house, Woolley & Wallis in Salisbury. As I hop, my father Martin is seen sitting next to me, his arms calmly crossed. It’s fair to say that he was always a less demonstrative guy than me.

Now the skeleton has joined my family in our home. Because it’s a parrot lizard, so named for its curved beak that evolved to help it shred plants that were its staple food, my daughters and I named it Polly.

By the time the bidding started, my dad and I had already inspected Polly in the auction house’s showroom. I knew it was in pristine condition, with the bones mounted in a glass case on a bed of sand, as if a paleontologist had just brushed aside a layer of earth.

The exhibit belonged to a private collector, who had bought it from a museum in Hungary, and before that it had been displayed in a museum in New Zealand.

I first heard of its existence from my brother James, also a historian, who spotted it while browsing the Georgian furniture that made up the bulk of the Woolley & Wallis catalogue.

James knew how much I longed for a real, complete dinosaur skeleton. As a boy, my favorite birthday present was going to the Natural History Museum in London, where I marveled at the Diplodocus in the main hall and the plesiosaur fossils in display cases.

During school holidays, I liked nothing more than to roam the coastline around Lyme Regis in Dorset or the Isle of Wight, in the hope of discovering a spectacular fossil.

My historical heroine was Mary Anning, who first discovered an Ichthyosaurus skeleton in 1811 when she was 12 years old, helping to demolish the mainstream scientific theory that the Earth was just 6,000 years old.

I found ammonites, those circular shell-shaped fossils so common on the south coast, but I couldn’t dig up any ichthyosaurs. My enduring parents will tell you that it was not for lack of trying.

When I was a boy in the 1970s, much less was known about dinosaurs, and most books on the subject were aimed at young children or postgraduate experts.

In my early teens, my obsession waned – or rather, it transferred to a new subject, the Roman Empire. Like dinosaurs, the ancient Romans are glamorous, fierce and extinct. The Romans are the tyrannosaurs of antiquity, the apex predators, red in teeth and claws.

My first history book was a study of the late Roman Republic, the years leading up to the assassination of Julius Caesar.

My fascination with this era is matched only by the enthusiasm I had as a child for dinosaurs. That sense of childhood wonder has been rekindled in recent years. We are living in a time of new discoveries, a golden age for dinosaur fans, where fossilized remains of previously unknown species are identified almost weekly.

Computer animation allows digital artists to recreate these magnificent animals with extraordinary vividness and precision. The Apple TV+ series Prehistoric Planet, narrated by Sir David Attenborough, is so realistic it’s easy to imagine we’re watching real wildlife documentary footage. And the internet has given me access to unlimited expert research. I follow many of the world’s brightest paleontologists on Twitter, and they are the most generous, always willing to sacrifice their time to answer my impatient questions. 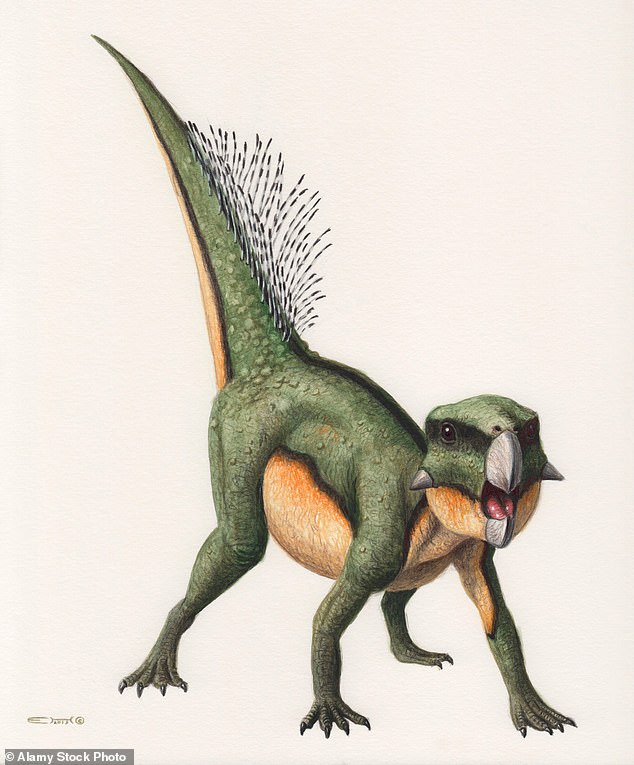 Parrot-Faced: What Tom’s Psittacosaurus Dinosaur Could Have Looked Like

Dinosaur hunting will always be a hobby for me, not a profession. I recorded a program for Radio 4, an edition of From Our Own Correspondent, in which I visited the extraordinary Royal Tyrrell Museum of Paleontology in Alberta, Canada.

There I saw a dinosaur feather preserved in amber (yes, many were feathered, just like the birds that are their descendants).

Three complete tyrannosaur skeletons were on display, alongside a boulder that revealed the exact moment in geologic time when an asteroid hit Earth 66 million years ago, wiping out the non-avian dinosaurs.

I’ve also witnessed digs, including one in the wilderness of Wyoming, USA, where I saw the leg of a colossal sauropod being excavated on a stretch of desert known as the Jurassic Mile. But I will never have the knowledge or the money to lead an archaeological expedition, too bad.

My brother understood all this and pushed me to try my luck at the auction house. When my dad and I arrived, our hopes for success seemed dim – and dwindled a lot as it took place. We were the only audience members.

After seeing auctions on TV, I expected a room packed with bidders waving papers and signaling their interest with winks and nods.

Instead, at a row of tables behind the empty chairs, staff sat at computer terminals with telephone headsets, taking offers from the Internet.

My heart sank. It could only mean Silicon Valley dinosaur enthusiasts were tuning in, ready to transfer tens of thousands of pounds at the touch of a button.

There were over 50 lots for sale before the Psittacosaurus appeared, and my confidence went down with each one. A few other fossils were on sale and I decided, to make sure the afternoon wasn’t completely missed, to bid on one or two.

I was thrilled to acquire the jawbone of a mosasaur, if only because it’s the giant marine reptile that leaps out of a pool in the 2015 film Jurassic World and gobbles up a flying pteranodon. . . and an unlucky theme park employee named Zara.

Another hundred pounds got me a fossil simply labeled “dinosaur bone.” They were prizes, but that was not what I had come for.

One of the reasons I was so keen on buying the Psittacosaurus was its flawless provenance. A disturbing trade has developed in fossils, extracted from the ground by unlicensed diggers who make no effort to preserve the site and cause immense damage to places of great scientific value. 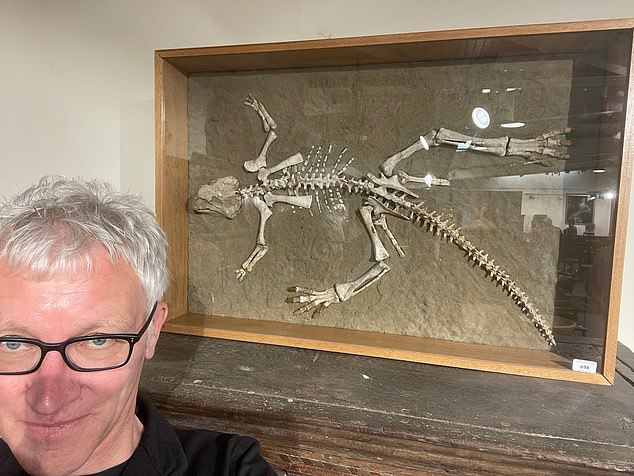 The 54-year-old (pictured Tom Holland) accompanied his father to the sale at Woolley & Wallis, of Salisbury, Wilts, to bid on a Psittacosarus (parrot lizard) skeleton between 97.5 and 119 million years old .

This is akin to the illegal sale of antiques from historical sites. I despise these destructive traders, who are no better than thieves.

I had in mind an object that had belonged to at least two museums and was therefore convinced that it had been acquired responsibly.

After a long wait, lot 698 showed up. It has been described as “a skeleton of Psittacosaurus, Early Cretaceous Period, 119 million to 97.5 million years BP”, i.e. before present.

The description reads: “A bird-shaped skull and beak mouth, mounted on a naturalistic desert sand backdrop, in an 85cm long glazed hardwood case.”

The catalog added that it was “remarkable for its bird-like appearance”. Despite its small size and lack of horns, it was part of the Ceratopsia group which included iconic dinosaurs such as Triceratops.

My daughters, who never shared my fondness for dinosaurs, fell in love with Polly – although, of course, what they really enjoyed was the sight of me on CCTV, unable to control my excitement.

There is now a family confrontation over where Polly will be displayed. The girls want it on the kitchen wall where everyone can admire it.

But I think she will have to go to my office, where I can watch her while I work. . . and where no one can see me while I do my dinosaur victory dance every day.