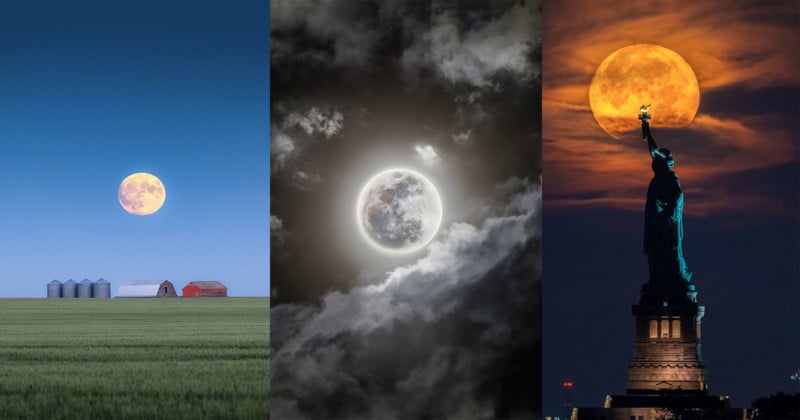 The supermoon lit up the sky this week, peaking on Wednesday when it appeared 30% larger and brighter than usual.

Also known as Buck Moon, July’s full moon gets its name from early Native Americans because male deer shed and regrow their antlers at this time of year.

The last supermoon was on June 14 and was called the “strawberry moon” because it was around strawberry harvest time.

Andrew McCarthy used two telescopes and two cameras to capture the Buck Supermoon as it shone through the clouds above Florence, Arizona on Wednesday.

Photographer David Jenkins captured a flypast past the Buck Moon near his home in Canberra, Australia. Jenkins says it was cloudy, but the sky cleared just as the moon was 99.8% full.

Dan Martland captured these fiery shots of Lady Liberty in New York with his Sony Alpha 1.

From the crowded city to the prairies, Herry captured a serene setting of the supermoon rising in Pense, Saskatchewan, Canada.

Last night was beautiful in #Seattle. The #sunset and the #moonrise all in a 25 sec ICYMI video. #buckmoon #supermoon #tahoma pic.twitter.com/MZiHZZ9RMO

Photographer Sigma Sreddharan posted a beautiful moonrise timelapse of the city of Seattle. Shrunk to 34 seconds and with Mount Rainier visible, the Buck Moon looks remarkably bright in the evening sky.

What is a Super Moon?

Supermoons occur because the Moon orbits Earth in an elliptical path, rather than a circular one.

This means that there is a point in its 29.5 day orbit where it is closest to Earth, known as perigee, and it passes this point during a full moon at certain times of the year. ‘year.

A full moon at perigee appears 14% larger because it is closer to us, and only 30% brighter than a full moon at apogee – the point where it is furthest away.

A supermoon is also only about seven percent larger and 15 percent brighter than an average full moon.

Some parts of the scientific community, including NASA, use the definition of a supermoon established by astrologer Richard Nolle, who in 1979 classified it as a full moon that is less than 90% of its perigee – the closest point to the Earth in its orbit.

The next full moon will be on August 11 and will also likely be classified as a supermoon. August’s full moon is known as the “sturgeon moon” because the prehistoric-looking giant sturgeon of the Great Lakes and Lake Champlain were more easily caught during this part of the summer.